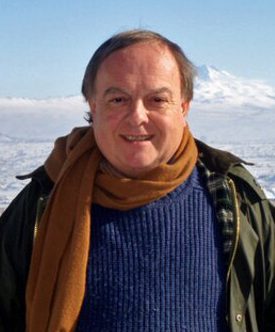 The live stream has ended and has now been replaced with an extended recording of the service including the committal.

David was the eldest of four children (David, Sue, Tish and Michael) of John and Dorothy and we had the great good fortune to spend our early years in rural Lancashire where we were free to roam as long as the day was long. David had a very strong sense of family and took his duties as older brother very seriously, sometimes too seriously for his siblings who were expected to tow the line! He would invent games for us to play in the woods and even a language to speak but he also got us into trouble.  Sometimes he would deliberately make us miss the school bus but, unfortunately, our Mother was not fooled and made us walk the four miles to our primary school!  Sue found primary school to be less easy when he was no longer sitting next to her doing all her work!  Only recently he gave short tutorials to some of his great nieces and nephews on the history he was compiling of the Barchard’s.

The family moved to Yorkshire in the early 1960s and David promptly took that county into his heart, his love of history being nourished by the plethora of ruined abbeys and priories.  Although he spent many years living in Turkey (his country of adoption) and where he infinitely preferred the climate over that of Nun Monkton, it was always to Yorkshire and Nun Monkton that he returned.  He was fiercely protective of the village and served as Councillor and Chairman of the Parish Council, as had his father before him.

We have received so many tributes to David from all over the world and we are eternally grateful for these.  The recurring theme of all of them are his great intellect and erudition, integrity, loyalty, kindness, generosity and, above all, humility which is testified to by the fact that we, his family, had little idea of the extent of the enormous esteem in which he was held by so many from all walks of life.

It was his wish to join his parents and younger brother Michael in the Nun Monkton burial ground where he had the foresight to buy several plots many years ago in order to ensure that the family remained together.  His sisters, brother-in-law, nieces and nephews and great nieces and nephews will sorely miss him, as will his many friends throughout the world.

David and I entered Lower Grammar at Stonyhurst 60 years ago this year, and we were also at the same Oxford college, so we go back a long way; since then our contact has been more sporadic, but with his discovery of e-mail (ahead of most of us, I fancy) the pace undeniably quickened. One of the features of his character that has emerged in the flood of comments provoked by his death has been his utter integrity; if a thing was wrong, then he said so; and sometimes that could be uncomfortable, but I recall that I was very grateful for the (not uncritical) advice he gave me both when coming for interview at St John’s College and the next year when I entered the College. Another of our contemporaries at Stonyhurst and Oxford, Stephen McCarthy, remembers how he and David, on a “gap term” out of school before coming up to Oxford, 1965; and started with a job in a youth hostel. David, however, decided that they were being exploited, so Steve found himself walking out of the job and hitching down the Rhine, where they got a better-paid post washing-up in a hotel. He also remembers how even then David was talking about Byzantine history and culture – “the whole time”, the first adumbration of the career that he has graced ever since. It was also a great joy, both at the time, and even more so with hindsight, that so many of us from that year of 1960 were all together in a Zoom conversation just four days before his untimely death. David was on good form, arguing, among other things, over whether Dostoevsky or Tolstoy was the better writer. David was deeply religious, though not in any narrow way; and his ecumenical heart must be gladdened that his requiem mass is taking place here in this Anglican church where he so often attended services, as I recall he regularly did, 50 years ago at St John’s when he was an undergraduate. May his great soul rest in peace.

Before the days of the internet, the Foreign Correspondent was a figure of awe. The FT’s David Barchard was one such towering presence. But when my wife and I first bumped into him by accident at Istanbul’s Atatürk Airport, we were amazed that the man we knew from his formidable byline was a small, affable chap in a cap. That was 40 years ago, and David became a friend for life, as he did with countless people, many of whom he met by chance.

The story goes that David was led to Turkey by Rose Macaulay’s classic The Towers of Trebizond, and it was not so far from Trebizond – or Trabzon as it is now known – that he first came to understand the country. He went to teach in the coal-mining port of Zonguldak on the Black Sea as a young Oxford graduate in 1969, and the friendships he struck up there lasted a lifetime. Half a century later, the sister of one pupil recalled his delight when her mother baked him a cake.

When David returned to Turkey in the 70s he had switched from academia to journalism and settled in Ankara as a correspondent for the Financial Times . He remained an Ankara man through and through, much to the bemusement of his friends in Istanbul. From being a country with few imports, constant power cuts and an impossible telephone service in the 1970s, Turkey emerged as an economic free-for-all in decades to come. David was one of the few commentators who understood the political currents driving this transformation. His firsthand experience, contacts and wide reading placed him head and shoulders above his fellows. And he could sit down at the telex and file a 3,000-word report, all without notes.

David was honest and fearless, whether speaking out against social injustice, reprimanding ‘spineless academics’ (almost as risky), or defending his adopted country. He was never afraid to call a spade a spade (often that spade was a Greek or, in recent months, Mr Macron meddling in the Med). On one thing everyone is agreed: he did not suffer fools.

He opened up a whole new world through his articles and lectures. As the FT’s Richard Cowper writes, ‘ he was truly a legend in his lifetime’. A respected historian, marshalling facts on an encyclopedic scale, he was also a born narrator, writing as he spoke, conveying historical drama with effortless lucidity. His lectures were proverbial, delivered at an urgent pace “without deviation or hesitation”, and again without any notes.

If there was one place to rival Nun Monkton in his heart, it was Uçhisar (pronounced Ooch-hiss-ar) in Cappadocia. An old friend lent him a cave house there and he spent his last years in Turkey gazing over the other-worldly landscape as he tapped away in the company of a beloved cat. He was one of nature’s great conversationalists, and on freezing winter evenings he would climb the icy lane up the hill to dine with friends in front of a roaring log fire at the Elai Restaurant.

David never forgot his friends or the places he loved. When he was out on his walks in Nun Monkton he often shared photos of the Ouse and the Yorkshire countryside with far-flung friends. It is fitting that he is being laid to rest at St Mary’s with its Burne-Jones windows of which he was so proud. I speak for many when I say that Nun Monkton will remain a place to visit for those who want to remember him.

He is already sorely missed.

Donations, if desired, may be made to either:

The Anglo-Turkish Society notes with deep regret the untimely death of one of its Vice-Presidents, David Barchard, who did so much to further the cause of amicable relations between the United Kingdom and Turkey.

The Society will be very pleased to accept donations in order to set up a fund in his memory. The fund will be used for an annual essay prize in David Barchard’s name, which will be administered by the Society. However, it would be equally pleased to administer any other donations, such as to found a scholarship, depending on the wishes of the donor.

Donations may be sent to:

Please put David Barchard Memorial Fund in the reference line of any donation.

The Anglo-Turkish Society is a UK registered Charity, number 278727.

Any inquiries concerning the David Barchard Memorial Fund may be addressed to David Shankland, Chairman.

The web-site of the society may be found here:  Anglo Turkish Society: Welcome.

Opens in a new window / tab